In 1921, the author, poet and journalist Aharon Ze’ev Ben Yishai wrote that Tel Aviv was intended to “house European beauty in Asian tents,” that is, to enhance and elevate Oriental civilization through the integration of European architectural styles. To fulfill this goal, Tel Aviv homes in the 1920s were very eclectic. Examples of unique buildings from this period include the Pagoda House designed by architect Alexander Levy (which was actually inspired by a café in the US), Beit Hadekel (Palm Tree House) by architect Yehoshua Zvi Tabachnik (who embellished the building with biblical motifs); the Twin House designed by Yosef Berlin (with its Dorian pillars and arches) and the Palatin Hotel by the architect Alexander Baerwald (with its special arches and hanging balconies).

Eclectic architecture combines elements from different styles and historical sources; Tel Aviv’s dream homes were a mix of oriental, neoclassical and decorative styles as well as art nouveau, art deco and Eastern European trends. Oriental and biblical elements were supposed to symbolize the progress of Jewish history in Eretz Yisrael, and the national dream.

In the context of Zionism, and the building of Eretz Yisrael, the Oriental movement in architecture took on national and political meaning. Architects used this style to recreate or even invent a new and unique style that would symbolize the history and heritage of the Jews in their ancient homeland. In 1906, the Bezalel School of Art and Crafts was founded in Jerusalem. Its founder and manager, Boris Schatz, believed that original Jewish art should reflect local and Oriental trends. The Bezalel building in Jerusalem is an example of this thinking. This approach significantly influenced architecture in the Eretz Yisrael, and specifically in Tel Aviv. Architecture in Tel Aviv combined local Arab as well as European and Oriental styles. Ornaments such as, cornices, railings, lugs, columns with capitals, were fashioned from cast concrete. The Herzliya Gymnasium building, designed by Joseph Barsky, made a special mark on the Tel Aviv landscape. It incorporated motifs from Muslim architecture such as pointed and  horseshoe-shaped arches, serrated railings and towers. Inspired by the approach of Boris Schatz, Jewish elements such as the ‘’horns’’ of the Temple’s altar were incorporated.

After World War I, construction continued in the same style but from the mid- 1920s, the number of three-story buildings increased. During this period, dream houses began to be built, and the rustic uniform appearance was replaced by a higher skyline and more diverse urban look.

Influenced by Boris Schatz and the Bezalel school of thought, architects integrated pointed and round arches, serrated railings, towers, and colorful geometric ornaments. In the end, architects discarded this style for a more European look. During the construction of the Pensak’s Passage, the romantic eclectic style with which architects attempted to design a local Tel Aviv look gave way to rational eclecticism with international influences. In Pensak’s Passage, built in this latter style, the mix of styles made the façade design appropriate for a commercial building on a commercial street of a large city.

The European eclectic Tel Aviv architectural scene, in which architect Yehuda Leib Magidovich (1886-1961) was a prominent player, included baroque elements such as domes and twists, neoclassical motifs such as columns, and gabled and oriental features such as pointed arches and spiers. Some buildings were built in Russian-Orthodox style and some painted in different colors like the dome of the Ben Nahum Hotel, designed by Magidovich. The use of European style reflected the Zionist aspiration that Tel Aviv would resemble a European resort town. Notably, Tel Aviv became a member of the International Federation of Garden Cities and Urban Planning in 1923. The colorful dream homes made the city look like a toy city. Those who liked the style argued that each house expressed the individuality of its owner. Others criticized the phenomenon and advocated for a uniform style of building.

Eclectic architecture dominated the world of architecture throughout the 1920, the same years of Magidovich’s eclectic period in Tel Aviv. Two main design approaches were used. The synthetic approach entailed a free selection and organization of elements and shapes. The scientific approach required the architect to study past architecture in depth so he could follow the plan accurately. The goal of both approaches was not to duplicate the past but to use knowledge of the past to enrich the present form.

Few architects followed the scientific method. In his architecture, Magidovich chose the synthetic approach. The scientific approach, involving great accuracy and detail, required economic and technological resources that were not available at that time in Tel Aviv.

The selection involved two different processes: choosing motifs and architectural details, and choosing types and shapes of buildings. Literature on different building typologies and design styles were available. For Pensak’s Passage, Magidovich chose the typology of a commercial building, with a commercial facade to the street, and an interior space that connects all the levels together. Further examples of the use of building typologies can be seen in other buildings of Magidovich from that period. 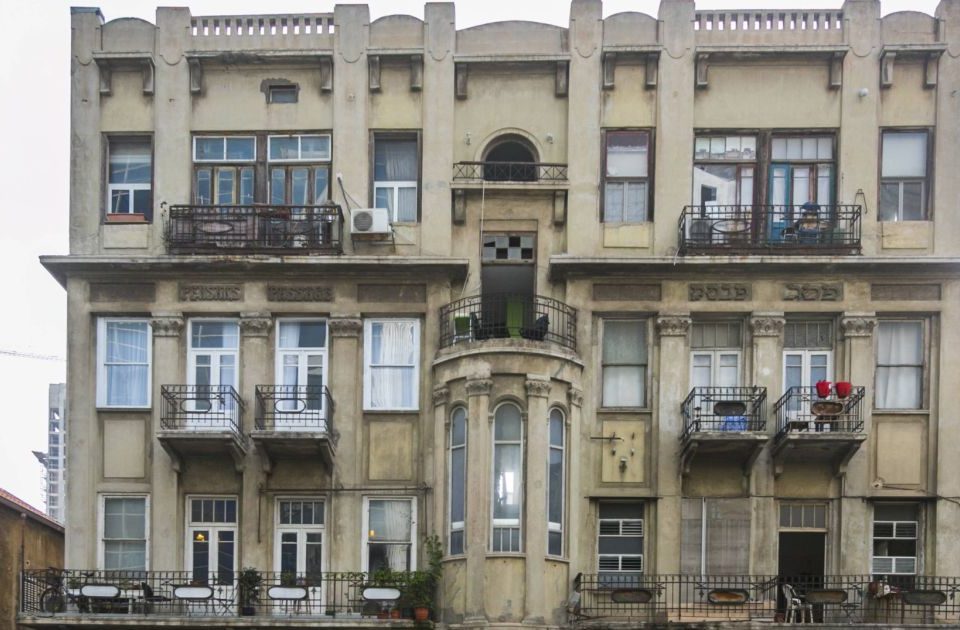 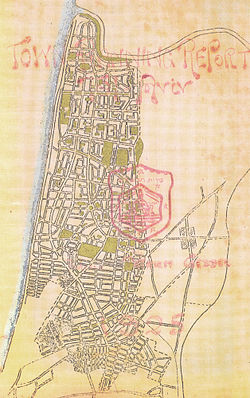