Sussita its History, Discovery and Conservation

The story behind Gymnasia Herzliya’s first campus, and how its destruction sparked the establishment of a national preservation organization.

Founded in 1905, the Herzliya Hebrew Gymnasium (in Hebrew, HaGymnasia HaIvrit Herzliya) was the country’s first Hebrew high school. Today, the school’s modern campus is located on Jabotinsky Street in Tel Aviv; however, the school’s first home was on Herzl Street in Ahuzat Bayit, the neighborhood which later developed into Tel Aviv.

How do you decide on a site for the first Hebrew school?

When the founders of Ahuzat Bayit convened to discuss exactly where to construct the new Gymnasium, the result was a heated argument. Among those present was an influential group of immigrants from Odessa, including prominent figures such as Benzion Mossinson, Yehuda Matman-Cohen and, Menachem Shenkin, who, with the encouragement of Menachem Ussishkin (a member of the Odessa Committee), were pushing for the establishment of an urban center of secular culture and economic growth much like the progressive cosmopolitan city they had left behind. Due to this worldview, they were also active supporters of the Gymnasia project and the liberal values that it embodied.

The view from the train

It was this group’s influence that determined the final site of the high school; the deciding factor was that people would see the building from the train as it crossed Herzl street. The new site blocked Herzl Street, the main artery of the neighborhood, but this decision reflected the birth of a new Zionist model that saw culture as a central component of urban life. And it also enabled Ahad Ha’am, who lived in the Gymnasium complex, and was part of the Odessa circle, to become an important player in shaping the city. 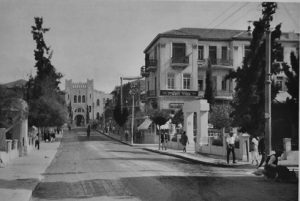 The cornerstone-laying ceremony for the school’s new building took place on July 28, 1909. With the new Gymnasium, Ahuzat Bayit was no longer a peaceful residential neighborhood:  life in Ahuzat Bayit centered around the Gymnasium, which became a social, cultural and community center and an important economic resource.   The student body grew (from 195 in 1910 to 721 four years later) and the new Gymnasium generated a significant income from rent, teachers’ salaries, food, etc.

The cost of the land and the construction expenses were funded by Jewish businessman and philanthropist Jacob Moser from the town of Bedford, England. The building was built by Yosef Eliyahu Chelouche and designed by architect Joseph Barsky (inspired by descriptions of Solomon’s Temple) in collaboration with Boris Schatz.

Recognizing the importance of Historic Landmarks

By the mid-50’s the structure had deteriorated badly. At that time, there was a lack of awareness as to the value of historical preservation, and the building was razed down in 1959 to make way for the Shalom Meir Tower.  The fate of the first campus of the Gymnasium, among other events, sparked the establishment of the Society for the Preservation of Israel Heritage Sites in 1984. The society’s logo features the Gymnasium building. 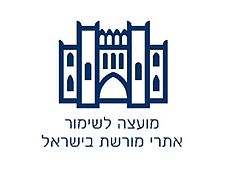