Tel Aviv has many architectural gems.  These are historical buildings that need to be preserved. You don’t often see them under the layers of dirt and grime, but they are there.  One such gem is a building called “Pansek’s Passage” . It is the first commercial building in Tel Aviv and home of the first elevator in Tel Aviv.

Pansek’s Passage is located at 16 Herzl Street. It was constructed in 1924. The plot, which was one of the original plots of land in the first neighborhood of Tel Aviv, Achuzat Bayit, was not taken in the original distribution of the land. However, in 1913, a wealthy Jewish Businessman from Brooklyn, Arye Zvi Pansek, bought the plot of land. World War l prevented him from doing anything with it.

After the war, the city of Tel Aviv was on the rise. It became an independent township in 1921. The New Commercial Center south of the train tracks was under construction and Tel Aviv was the preferred place of residence for Jews making aliya at that time.

Uniqueness of the Historical Building. 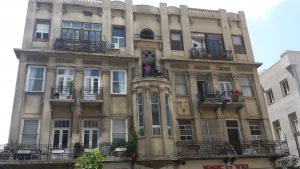 The building was originally designed as three floors, but later on a permit was obtained to add on an additional floor. The building is built in a square around an internal courtyard. In this courtyard was the famous “ma’aliya”. 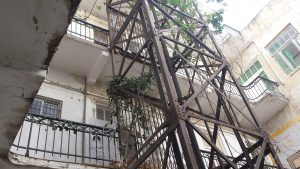 The building housed a restaurant on the roof which had a live band.  It housed stores, a printing press and offices. It was considered the ultimate in modern commercial premises at that time.

The building which is an historical building, is on Tel Aviv’s list of land mark sites and although the building has gone through some renovation work, it has yet to go through actual preservation work.