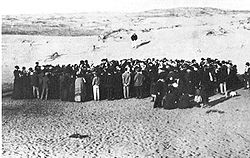 Tel Aviv – a city built in a void or the city that grew alongside Jaffa?

Tel Aviv is often described as a city that ‘’grew out of the sands,’’ or built from scratch.  This notion comes from accounts written by its founders, who spoke about the need to level the sand dunes before they could begin to build Ahuzat Bayit, which was the beginning of Tel Aviv as we know it today. For example, Yosef Eliyahu Chelouche, entrepreneur, businessman and industrialist, and one of the founders of Tel Aviv, wrote in his memoir Parashat Hayai (Reminiscences of My Life) , published in 1931  “Tel Aviv was a sandy tract of desolate land, similar to a desert of mountains and hills where jackals wandered; the sandy earth was devoid of vegetation or greenery, except for withering vines here and there, neglected and abandoned”(my translation). 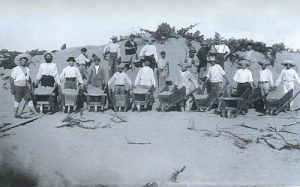 Many scholars refute this claim, however, noting that Tel Aviv was not established in a void, but adjacent to Jaffa, which was already an important and thriving city Eretz Yisrael, with many vineyards. Ahuzat Bayit, was after all, built in 1909, following three years of intense and complex negotiations that resulted in the purchase of the lands needed to establish the new town. At this time, Jaffa had already existed for many years;  new neighborhoods, outside the walls of its old city began to develop as early as the second half of the 19th century.

So in fact, the beginnings of Tel Aviv can be traced back to Jaffa. When security conditions improved, residents of Jaffa — Jewish, Christian and Arabs alike– began to leave the Old City. In the later part of the 19th century, especially following the demolition of Jaffa’s old city walls in 1879, the construction of new neighborhoods, separate from Jaffa, began.  This urbanization process characterized the development of many ancient cities in the world and was not unique to Jaffa. Many of Jaffa’s residents who chose to move to the city’s outskirts were seeking to improve their quality of life.

However the Jewish neighborhoods first built outside the walls of Jaffa were not well planned. Land was purchased according to availability, and houses were built to serve residential needs; plans were not made for public parks, wide streets, sewer, water and electricity systems. The roads in these neighborhoods were narrow and dirty alleys. Planning was undertaken with no real assessment of needs; in addition, great masses of Jewish immigrants who wanted to settle in Jaffa increased the demand for new apartments. Many of these newcomers were poor, as is is reflected in the construction and dwellings described in detail by an observer from that period: ‘’Roads are either non-existent or they are cracked and defective, and children wallow in the sand and garbage and sewage and between the feet of passers-by. The courtyards are stifling because of the heat. Water is drawn from nearby wells close to sewage or from courtyard wells. There are no parks or playgrounds to speak of.  The Jewish neighborhoods were built according to eastern tastes and order, although not in the special style of their buildings, and poverty – and even more negligence – makes them ugly and dismal.  There is no architectural plan. Curving alleys, apartments heaped upon another and despicable places … where is the sanitation and hygiene? Dust clouds and swarms of flies on the hot days, slime and pools of water on rainy days.” (my translation).

In light of this situation, both in the Arab and Jewish neighborhoods, and given the severe shortage of housing in Jaffa following the arrival of masses of Jews during the Second Aliyah as well as the subsequent rise in housing prices, Jaffa residents and others began looking for a solution. They envisioned a new neighborhood, different and separate from Jaffa. Thus, Ahuzat Bayit was born.