Israeli Historic Preservation as an Answer to Anti Semitism

Do you know where the New Commercial Center of Tel Aviv is?

The New Commercial Center of Tel Aviv is a whole neighborhood and it is located in what is called today “North Florentine” or “Shuk Levinsky”.

The boundaries of the neighborhood are in the north – Yaffo-Tel Aviv St., in the south – Wolfson Street, to the west – Markolet Street and in the east – Ha’a’liya Street. 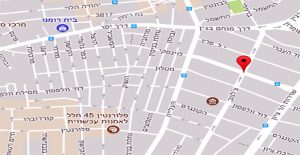 The negotiations were completed in August of 1921 and construction on the new neighborhood began.

Uniqueness of the Neighborhood

The streets of the new neighborhood were arranged octagonally just like most commercial districts are in other cities of the world. The Tel Aviv committee (which in the meantime was established by the British Mandate government as a township in May 1921) extended its water and sewage lines to the neighborhood.  In addition to this, the public transportation to and from Tel Aviv went alongside this neighborhood. 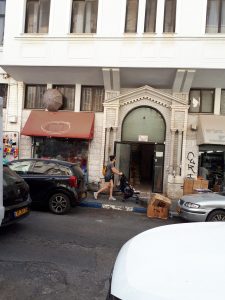 The growth of the New Commercial Center of Tel Aviv.

This neighborhood grew as the demand for more buildings grew, especially after the Arab riots of May 1921, in which many Jewish businesses in Jaffa were ravaged and destroyed and many Jews were killed or injured,  causing many Jewish businessmen to move their businesses from Jaffa to the new neighborhood. As time went on other neighborhoods sprang up next to it such as Neve Sha’anan and the Chelnov Neighborhood. A modern market for fruit, vegetables , meat and fish was built nearby called “Shuk ha’aliya. Soon Tel Aviv surrounded Jaffa from the south thereby cutting off it’s expansion. Jaffa became an island surrounded by Jewish settlements, including the town of Bat Yam, just south of Jaffa.

Despite the important role this neighborhood played in the development of Tel Aviv and the surrounding towns (such as Bat Yam ) the original name of the neighborhood has been replaced with such names as North Florentine, Shuk Levinski etc. The name of the New Commercial Center, as well as its history, has been forgotten. 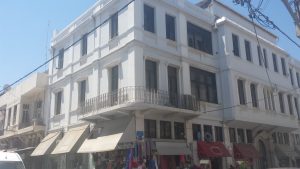 This neighborhood houses many beautiful buildings built in the eclectic and international styles, yet many of these buildings are not slated for preservation. 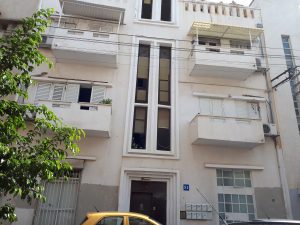 No one remembers the story of the “New Commercial Center” of Tel Aviv.

If something is not done to preserve this neighborhood in its entirety as a historic district, which is done with many historical districts all over the world, the unique story of this neighborhood , the sense of place and the spirit of the place will be forgotten and lost.

Menachem Gilutz’s was one of the first 66 families who established the neighborhood of Ahuzat Bayit which became Tel Aviv. His home on 24 Ehad Ha’am Street was demolished. Will the building he built in the “New Commercial Center” be demolished as well? Let’s hope not.