Yehuda Magidovich, Tel Aviv’s ultimate architect,  served as Tel Aviv’s Chief Engineer between 1920-23. He was born in the city of Uman, in Russia in 1886, studied architecture at the Academy of Odessa and immigrated to Eretz Yisrael at the beginning of the Third Aliyah, in 1919. He came on the SS Ruslan, together with many artists and architects such as the painter Yitzhak Frenkel, art collector Yaakov Ferman, architect Zeev Rechter and other well-known intellectuals.

His work in the Tel Aviv Township

In 1920, a technical committee was established under the Tel Aviv Committee to review plans in accordance with the building laws, supervise their implementation, and ensure that the external appearance of the buildings met aesthetic standards.  In 1921, when Tel Aviv was recognized as a township, the Tel Aviv Local Council was established, along with a municipal building committee. The Association of Engineers and Architects was founded in 1922. Magidovich, along with some of his fellow immigrants on the Rusian, played important roles in these institutions.

His early work in Tel Aviv

Magidovich had studied the trends of 19th century Western architecture, which combined eclecticism and a revival of old styles; this significantly influenced Magidowitz’s designs in the 1920s. Some of Magidovich first jobs involved planning additions to existing buildings, such as the Izmosik House on Lilienblum Street and the Lerner House on Ehad Ha’am Street. One of the first buildings he designed in 1920 was the three-story Trachtingot House at 3 Lilienblum Street; the ground floor was intended for commercial use and top two floors for residential use. The building had classical decorations and a tin dome. In 1920, Magidovich also designed the Mizrahi house at 3 Yehuda Halevi Street, which looks like a Roman villa.

Magidovich’s designs are unique; many of his buildings represent milestones in the city’s history. In the 1920s, he designed large public buildings as well as private dream homes. Among his most notable designs are the Great Synagogue on Allenby Street; the Ben Nahum Hotel; the casino building by the sea; the Moshav Zekenim Synagogue; and Passage Pensak (Pensak’s Passage).  Examples of private homes he designed at the time are the Levin House; the Segelov House; and more. These buildings reflect neoclassical, eclectic and oriental Eretz Yisrael styles.

Many believe that eclectic architecture is about the decorative elements, and that the building plan takes second place. This is not true when considering the work of many architects and certainly does not apply to Magidovich’s architectural compositions. Magidovich was influenced by the Beaux- Arts movement, which emphasized geometric composition. The architect’s idea should be expressed by the parti, which is the basic geometric composition of the plan that also dictates the design of the facades. In order to determine the parti, the architect had to be familiar with building typologies. After choosing the shape, he would arrange the interior axes and then adapt the facade to the plan of the interior. Magidovich’s plans display architectural integrity in that the facade matched the interior design.  When a building was located at the corner of two streets, Magidovich’s planned the building and its interior accordingly. Pensak’s Passage was in the middle of the street between two other buildings, so he designed a square-shaped building with symmetrical wings in order to create an open interior space. The façade complemented this concept. 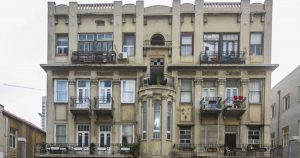 There is a distinction between Romantic and rational eclecticism. Magidovich used both in his buildings. Romanticism in architecture strives to create a unique local look even though it may integrate styles from different periods and places. Rational architecture has created a universal style. Magidovich’s Romantic period, which lasted until 1925, shows the optimism and enthusiasm of primal creations in a virgin land. During these years, Magidovich drew on medieval architectural styles as well as the Spanish Maori style, as is evident in the Kabalkin House (1924), the S. Ben Zion House (1925), and public buildings such as the Ben Nahum Hotel (1921), the Great Synagogue (1922) and the Moshav Zekenim Synagogue (1928). The Levin House also reflects the influences of Italian architecture. All of these designs reflect a search for architectural elements appropriate to the new Eretz Yisrael setting. 1925 was a time of economic prosperity and increased construction in Tel Aviv.

Towards the middle of the 1920s, things changed: Economic growth enabled the construction of large-scale buildings. People discarded the Romantic style in search for a style that would conform with the atmosphere and character of the big city.  Magidovich’s rational eclecticism designs include the Trade House for Iron on 6 Kishon Street (1921), and Pensak’s Passage (1925). Both buildings were built with a courtyard and a facade that resembled commercial buildings in Europe. Pensak’s Passage is based on building typologies from the beginning of the century in Berlin, such as the Wilhelma trading house built in 1905; the two buildings are similar.

The plastic design of Magidovich’s buildings reflect their function, target audience and geography. An example of this is the Post and Telegraph Office, which has a dominant presence and austerity that befits a government building. The casino building, which was a beach café, has a gentler look. Pensak’s Passage, a commercial building, was designed to convey seriousness and status; its façade has uniform geometric elements and prominent pilasters along the entire height of the building.

Yehuda Magidovich’s architectural career spanned two decades from 1920 to 1940.   These years were critical to the economic and architectural development of Tel Aviv. His work reflects and exploration of styles and the search of architects at the time for a unique local style.

In the 1930s, influenced by the modern movement in architecture, Magidovich changed his style and started designing according to international trends. The houses at 51 Allenby Street; 93 Rothschild Blvd.; 30 Lilienblum Street and the Esther Cinema building in Zina Dizengoff Square prominently reflect this style. The exact number of houses designed by Magidovich remains unknown, however researchers estimate that he designed and built about 150 buildings throughout Tel Aviv. Unfortunately, his personal archive was almost completely destroyed because of an accident. 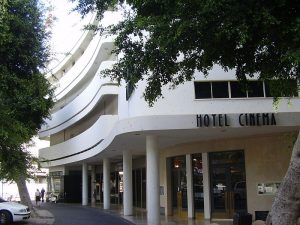